Odell Beckham Jr. is facing allegations that he tried to pay a woman for sex and consumed illegal narcotics. Although, the Giants receiver denies the allegations.

Finally! I’ve been saying this about ODDell for years now! I’m curious to see how Goodell and that b***h Freil handle this!

I said before when he was on that party boat he was using drugs…what was the NFL’s response?

Drug test Eli and others who weren’t even there!!

lol…dude is as famous as he is, and he still has to PAY for sex???

Maybe it was a dude 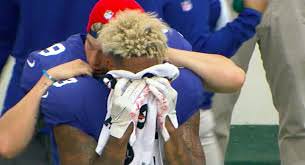 1000 bucks to him is like a dime to us. But as was previously stated he could get any number of women for NORMAL relations. So what was he doing that he thought it would be better to PAY someone for it? and I REALLY DON’T CARE about his sex life any more than I do Trump’s. Now if he was doing drugs the league damn well better make sure to punish him accordingly. I might have missed it, I am hoping the Vagiants have already extended his contract.

Here is something for all you Garrett haters … https://www.star-telegram.com/sports/nfl/dallas-cowboys/article215539175.html